The perception of the feminine role in aviation 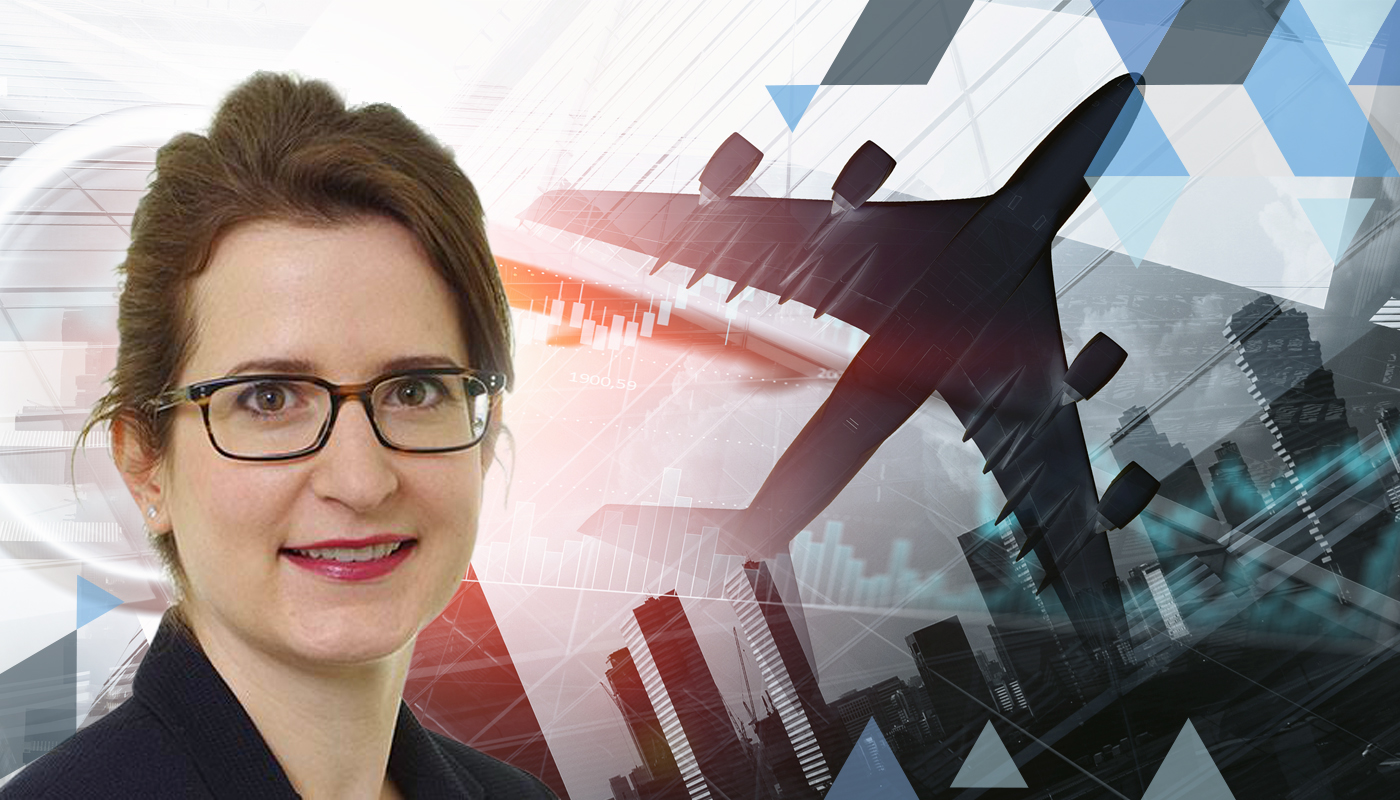 Kata Cserep leads the global aviation team of ICF. Her efforts are focused on the connection between the aviation ecosystem and the business strategy. During the last 15 years, she’s been involved in airline evaluation, commercial planning, market research like socioeconomic and sustainable tourism, and the due diligence of commerce between airlines and airports. According to Airline Economics, in 2019, she was one of the Top 40 Under 40 in the aviation industry.

In this exclusive interview, she talks with us about the perception of women’s role in the airline industry. She says that it is not that women can’t apply for a job, but rather than it is challenging to be part of an industry where you’ll be a minority.

“The pandemic has made us equal”, she says. How do we overcome the challenge?

- What can be done to push the inclusion of women in the aviation industry?

I will say a couple of things: number one is image and perception. I think that this has a significant influence on people who are considering joining the industry. Generally speaking, the aviation industry is still seen as a male-dominated industry with a few exceptions. Airline crews have traditionally been women. However, other areas, either for historical legacy reasons, like pilots, or more on the technical side, are seen as male-dominated, and therefore, few women would consider joining those. The second is perhaps more systemic and is the ongoing imbalance in the type of training and qualification the women have historically done. Many of the skills, roles, and technical areas of aviation are built on engineering, architecture, and technical disciplines that have traditionally not been dominated by women.

I think it is a pipeline and the perception issue is important. Indeed, in my experience, I have not seen instances of women not being able to apply. But what I've discussed, they don't want to join where they will be a minority.

- How to overcome this challenge?

Role models are fundamental, having people that set an example and become mentors for others. I always encourage when female pilots, female managers, and female engineers showcase and proudly publicize themselves within the industry and more widely to show that it is possible and that it can be a gratifying career. The second one is on a macro scale, education and training. It starts with getting young women interested in aviation and careers that might lead to a life in aviation, whether that's financial, technical, science degrees, aerospace, engineering, all of these qualifications can support a career in aviation. And, from a Government and education point of view, it is important to create more awareness.

- Do you have data from surveys regarding the current pandemic of COVID-19 and gender disparity?

We undertake surveys very regularly of the industry, but I must say I have not seen data of any gender differences and the impact of the pandemic. I have seen statistics from other specters, and those are quite concerning statistics. Women have been disproportionally impacted by redundancies or taking on more childcare and stepping back from work. Nevertheless, we've seen layoffs in areas dominated by women, like flight crews.

As the aircraft has been grounded, there's less need for the flying staff, and the crew is severely impacted. We also know that other areas are also being reduced. Indeed, in operational terms, this is a reasonable conclusion, and airlines have reduced staff in many other areas.

- How to increase women's role in aviation?

It is already changing, and it has been changing in other sectors as well as you have more women taking business degrees and entering commercial environments and having more flexibility to work and undertake full-time careers. We see that increase but it is a slow process. There are highly qualified women with many options, and they may look at all the range of sectors they can go with an economic degree or an MBA, and might not think straight away of aviation as the sector they might go with. There's no actual barrier. It is perception and it is coming from a place of imbalance, and therefore, the rebalance takes time.

- What region has advanced the most regarding female parity in the industry?

I'm an economist. I don't want to speak where I don't have data. I can comment on more global trends and where I have some familiarity. In Europe, there has been a tremendous amount of progress regarding equality, which has been supported by legislation and policies. We've seen a meaningful shift towards women generally. From my experience, I've worked in aviation for 15 years in several regions; I would say, as an anecdote, the proportion of women that I've interacted with has been higher in Europe, but I've seen quite progressive balances in other places. For example, when I worked in South Africa, there was already a decent proportion of women managing positions in an airline context. India is another market where I operate extensively. There, from a shallow base, we see a lot of support and encouragement for women in all areas of airlines.

- Which countries could be an example of gender equality in aviation?

I would probably point to the Scandinavian countries as the best examples. This issue is not linked to aviation but is a deep systemic facilitator of women being able to work and having equal rights. Having societal acceptance that fathers should and can stay with their children, and likewise, women can go to work and having childcare and government support that makes it possible is a crucial step. Otherwise, you have the traditional situation that somebody has to take care of the children, and more often than not, it falls to the women. I think that's a key facilitator, and the other one is direct scholarships, nurseries, support, specifically targeted for the air market. It doesn't have to be just women; it can be other minorities. But suppose there are well-publicized, well-supported schemes out there, such as campaigns to target more girls to apply for engineering or technology degrees. In that case, some good things can be put in place to support aviation. Nevertheless, there has to be a commitment from higher levels. It is a big push, and it takes a lot of effort and a lot of time.

- What are the biggest challenges you've faced while in the industry?

Given the topic of this interview, I'll link it to my gender, my role. It probably is striking a balance between having a family life and a full career. I've been in aviation for 15 years, and for the first 7 or 8, I didn't have children; I traveled extensively and worked extended hours. It was fascinating. I met lots of people and developed significantly. When my son was born, and then my daughter was born, the priorities changed, but I was very clear that I didn't want to stop my career. That presents challenges. I've been fortunate with ICF; I've been able to step back when I wanted to stay home and come back in. Not everybody has that kind of flexibility. Airlines make sure that they have off ramps and on ramps if someone needs to take some time off. On a personal note, the hard thing is managing both and being fully available for clients, businesses, and my family. That's the most challenging thing to manage. I feel very lucky and happy to do both.

- Does the pandemic present an opportunity for gender equality in aviation?

I will certainly say there have not been many positives about the pandemic. One of the positives is that everybody is in the same boat right now. Everybody is in lockdown, having to juggle work, childcare, and family. It is a good equalizer; for example, when I'm in video calls, and there are children. The perception that you have to be fully in the office, face to face, and not being able to do both is breaking down. What I think might be another positive is that there's flexibility at how people are working. Of course, this flexibility only applies to office jobs; if you're a pilot, crew, or work at maintenance, you can't do remote work. For those who work in offices, the flexibility that has been discovered across both genders, I hope it lasts. Particularly for women that find it challenging to balance work and do childcare. Women and men have to do both things.

- What message would you send women that are currently in the aviation industry?

Something to bear in mind is looking further ahead. Aviation is very resilient, and the underlying demand for aviation will remain. The appetite for flying, the value of connectivity, is proven and continues to grow. Coronavirus is a massive shock to the industry. I can't underestimate how hard the next period is going to be. But, anyone, men and women, can be sure that the industry will pick back up. The industry will evolve, innovate, and present opportunities to connect tourists, families, businesses. It will bounce back, that's a positive. The pandemic will also accelerate some trends like more flexible working, greater acceptance of nontraditional working styles, which should be positive for women. I would say that all women already in the aviation industry wouldn't see this pandemic as a reason to exit. It will bounce back, and the trends in terms of improving diversity will continue.

- What message would you send to younger women that are aspiring for a career in aviation?

For younger people: This crisis reminded me of when I wanted to join an airline after 9/11, and there were no jobs. I can relate to how somebody might have an actual draw to aviation and now think that there are no jobs here. You have to be flexible. If it’s something you're drawn to and perhaps for the next two years, there are no opportunities, there are other things you can do. There will be jobs in related fields that can help you prepare. Getting involved in the policy, government, regulators sides, on those more stable organizations; those are good options to start on your path. If there are no aviation jobs, many of the skills relevant to aviation, particularly in management or commercial areas, can be developed in other sectors. So, if you have a passion for aviation and you have a draw to the industry knowing the rebound will come, there are things that you can do that will be very attractive for the aviation industry. I wouldn't write it off, aviation is a fascinating industry that offers many careers. If we look long term in 10 years, we will look back and see an unprecedented dip, but it will bounce back. Over the span of an entire career, this will be just a blink.

The only other thing that is worth stating is that before I got into aviation, I was a researcher and worked in different sectors. I had the chance to interact with people in other industries. One of the things that struck me about the aviation industry when I went to airline events is how passionate and friendly those in the industry are. It is a global industry, but it is a small world. Most people that work in aviation never leave. They might move from airline to airport or supplier, but generally, people here love the industry. Aviation is a very satisfying industry. There is support even between fierce competitors. As a result, people share this passion for the industry. People are very supportive. As a minority, I've never experienced any negative interactions because of my gender. I sometimes feel weird being the only woman, but men have been welcoming, supportive. Even though it is very competitive, the character of the industry is positive, encouraging, and regarding.